staff rankings open: moderator
open slots: (0/2)
if you are interesed post a reply here asking about it

Hi everyone! My name is Dj SheepWolf and welcome to Medieval Knights! Our roleplay site work mainly with wolf adventure roleplay and we has been setted a new story plot for this, with more aditions. You can create two accounts to participate in RPGs! (But remember, contact a moderator or administrator before making the second account). This site requires account activation, we rely on the patience of all of you. Before playing RPG, read the rules, informations, guidelines and make your biography. After that, you can enjoy in our foruns and in roleplay scenaries.

You are in the Cooper Lands, a place of mysteries and wonders. There are two sides, the light and the darkness. In light side the creatures seemed to be happy. There the food is more plentiful, the soil is more fertile. In darkness side the creatures seemed to be sad, because there everyday they fight for survival. As these sides come from? That is another story...
5 years ago, there was a pack that dominated the entire Cooper Lands region, the Kanter Pack. In March 1427, the Kanter family celebrate the arrival of spring. That's when the Lyon family went out of the Southern Lands and come to Cooper Lands. The Kanter's wanted to protect their territory and declared war. It was when the cousins of the Lyon's, the Raghta's come to fight with them. The Kanter's lost the war and the territory. It was hence formed a new dynasty, the Lyaght family, which is now called the Light. The territories were divided into four clans. The first two the Narr and Fehrte clans were on the light side, while Umbrulus and Mangosly clans were in the dark side.[/center]

Into The Light is represented by the Kings and Queens of Fehrte and Narr clans. The territories of Into The Light are formed more for meadows and hills. The den of Fehrte clan is located inside a hill where it was dug. The den of Narr clan is located near a stream in a rocky cave. The members of the clans are respected, as they signed an allies agreement after winning a war together against the former owners of the land. After the war, the territories that would belong to each clan were divided.

♔ King & ♕ Queen
The ultimate power and authority holder was the King and the Queen and no one was allowed to be disloyal to the king/queen. They possessed them rights over all the land of the clan.

✉ Messenger
As the title indicates, a messenger is someone who delivers messages. On a broader level, messengers work in varying environments where they are required to take the king's news to other clan or clanmates. It may seem simple enough but the work of a messenger is difficult as there is a huge amount of responsibility attached to it and a lot of travelling involved.

⚔ Knights
These knights were normally refereed as military command. To each knight was given a ranking. This was done only after taking a royal oath to the king to serve him their lifetime devotion & faithfulness.

⚒ The Workers
They are the other members in the clan. They used a work for the clan in return of food, place to sleep etc. Members work as hunters, fishers, scouts, separators, mentors etc. The work are given by the king according to the qualification of the character.

☠ Killers
The killers are responsible for killing dishonest and not loyal members to the clan. 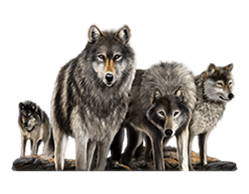 KendallK wrote:❝ Pack Member ❞
Username ₪ KendallK
Character Name ₪ Leigh (Pronounced like LEE)
Age ₪ 2 years
Appearance ₪ Brown and black silky fur with yellow-brown eyes
Ranking ₪ Killer turned rogue if possible please!
Secret Code ₪ Could not find secret code for the life of me lol. I looked for like 5 minutes and nothing came up! .-.

Secret code can be find on site rules: http://medieval-knights.ephpbb.com/t1-regulation-rules
Please read the rules carefully, so you can find the code. After finding the code, please submit it in your application, with that done, I consider you accepted in the roleplays.
Avatar by LupinzPack

KendallK wrote:Added code to original post for easier reading. Thanks for the tip!

Okay, now you can register on the site and make your character biography

Sure! But for some reason I can't send PM's for you ^^ I don't have any option in your profile to send it
Avatar by LupinzPack

MeghanKeko wrote:Okie I will send you the link thru PM. Sorry about that.

It's okay dear! ^^ Take your time
Avatar by LupinzPack

wolf of the stars
Newborn Wolf

This topic has not been posted in in months. The original author has not been online since March. Safe to assume this pack is currently inactive. I'll be locking this.

@Dj Sheepwolf - Feel free to let me or another moderator know if you want this pack unlocked.
♡
Top

- Topic unlocked upon request of the author -
And the tempest is raging,

And the tempest is raging,

couldn't tame it if she tried