Do you think this is a wolf? (Discussion)

Discuss wolf-focused literature, artwork, videos, and other media, or show off your own wolf art or writings in the subforums. Read the Rules for User Writings and/or Wolf Art before posting.

Forum rules
This forum is for wolf art, literature, videos, and other media. If you post a topic to discuss a piece of wolf artwork, literature, or other wolf-related media, you must include the original artist/author. If you post something that is not yours and claim it as your own, you may be warned or banned.
Post Reply
15 posts • Page 1 of 1

Do you think this is a wolf? (Discussion)

Take a look at this image of a canid: 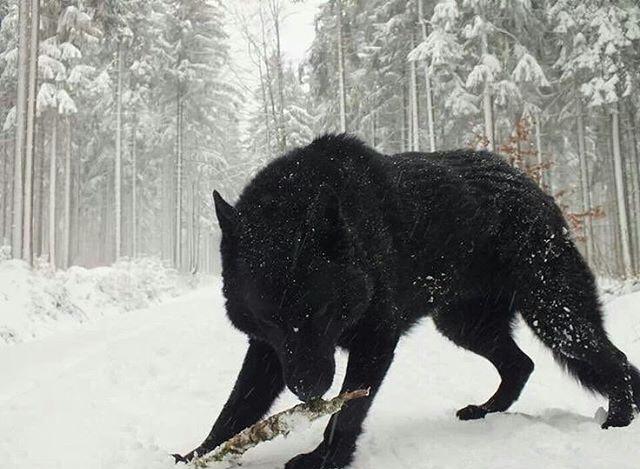 Anyway, the top comment in the thread--so the comment that the most people gave a "like" if you will--thinks that this is a picture of the widely publicized wolf Romeo. And from what I could see, most of the top comments on the the post also thought this was a wolf/Romeo.

I don't think so though. I initially reverse image searched to try and find the original source of the image, but did not have meaningful success.

Here's why I personally think it's a black german shepherd:

But those are just my observations... What do you guys think?

(Also: I posted my thoughts on the Reddit thread too, hopefully they will be seen. I'm pretty confident based on what we can see here that this is definitely a dog, or maaaybe a low content wolfdog.)
Last edited by DaniBeez on Mon Feb 11, 2019 11:51 am, edited 1 time in total.
DaniBeez
___Forum member since 2010
___Avatar by Koa
Top

yeah the moment i saw that i instantly thought of a dog. pointy ears with a lack of dense fur inside were what first caught my eye. the legs made me think of a gsd, and the rest of the head features like the cheek fur and all that just don't feel entirely wolf-y. also it's not exactly easy to get a photo like this of a wolf in the wild lol
freelance artist/illustrator // biology student and wildlife enthusiast // sometimes i draw things for WQ

I'm not under any illusion I'm good at things like this, but my mind immediately jumped to "dog" as well, largely because of the colouration and the ears. I think it also helps that the interaction with the stick just reminds me of any dog distracted on a walk.

That's definitely a gorgeous canine and photo either way, though!
♡
Top

I agree, it looks more like a German shepherd or, possibly, a wolf-dog hybrid. You made some good points about the ears and tail. German shepherds have longer tails that can also appear thin, with pointed ears.

This is Romeo. Note the more rounded ears and how his tail is shorter and less visible.

I've also read the book about Romeo and have done further reading on him, and have never seen this particular photo in your post before. But I agree with Anduril, it is beautiful!
And the tempest is raging,

And the tempest is raging,

couldn't tame it if she tried

Glad I am not the only one who sees it

! It goes to show our above-average interest in canids pays off

. Unfortunately, the way Reddit organizes comments means mine will likely never be read or up-voted enough to be seen before the post falls off from the top. The misinformation continues...

! Like come on. The account didn't even acknowledge my comment, even though it was only one of 7. There is a lot of dog/wolf mis-IDs on Instagram too.
DaniBeez
___Forum member since 2010
___Avatar by Koa
Top

It's important to note that the back appears sloped as well, which is characteristic of German shepherds.

To me, the animal you shared, DaniBeez, seems unnaturally black for a wolf as you mentioned. Perhaps the angle of the photo prevents one from best discerning the animal's fur coloration, but that tint of black aligns more with the regular dog pictured next to Romeo that Isela shared, than Romeo himself.

At the most, it's a low content wolfdog, and either a German shepherd or some other mix of dog, at the very least.
YOU SAY YOU WANT TO GET BETTER AND YOU DON'T KNOW HOW.
writing and artwork
Top

Agreed about the sloping back Koa; paired with those hind legs, it must have some shepherd in it.

I also noticed in the Reddit comments that many thought the animal was "big" or "huge" in size. The camera angle is definitely contributing to this idea I think!

It could be a wolf dog BB; When I reversed search the pic, I got hits for gsd, wolf-dog, and wolf. We may never know for sure I guess :s. The pose is also bad for looking at the face.
DaniBeez
___Forum member since 2010
___Avatar by Koa
Top

And this, this is why I love WQ and the users on it. You guys are interested in wolves enough to be able to tell the difference between them and other canines that look similar. I admire that interest, and seeing threads like these only fuel me to learn more about these wonderful creatures. Thank you guys.
Back after years, hello folks. c:
I'm a fan of wolves, nature, and art.
You can call me Spotted, Echo, or Grace.
I'm also on Flight Rising under the username Spottedleaf125
Top

! Your post is a wholesome reminder of how nice it is to have this forum to chat, create, and share about our common interest in wolves and nature.
DaniBeez
___Forum member since 2010
___Avatar by Koa
Top

that picture's pretty hard to tell for certain thanks to the pose and angle (the snow also makes it difficult to see some details too), but imo that's definitely not a wolf. as said before the ears are too thin and pointed and don't appear to have dense fur inside, the tail is much too long, and the fur is a pure black not naturally found on wolves. The legs look too short and robust (wolves tend to have longer, slimmer legs) and it may be the angle of the image but the hind legs are way too short (sloping back? the body seems shorter than it should be too but that may just be the angle).

i notice there is some slight feathering near the paws of the forelegs, while wolves typically have smoother wrists, but that might not mean anything. The fur on the neck and back looks a bit too smooth and plush imo, i notice most wolves' neck and back fur doesn't really look like that, but again that might be nothing.

the shape of the muzzle looks rather dog-like to me as well. it's kind of hard to describe but here are a couple of pictures of wolves with their snouts from a similar angle and there's a definite difference:
https://encrypted-tbn0.gstatic.com/imag ... KwqNSO0GOq
http://stmedia.stimg.co/mjmckinney_1419 ... JPG?w=2000
https://www.kiro7.com/news/local/state- ... /816910483
https://i.pinimg.com/originals/6e/da/e5 ... 7f7e6d.jpg

the "wolf" in the picture you show has a somewhat short, blunt muzzle and the way it connects with the face is more abrupt (? if that's the word i'm looking for). but it's mainly the boxy shape of its snout that stands out to me, even the wolf in the last example which has a blunter muzzle than the rest, has a smoother profile than the dog does.

It's a dog or a low content. If that was a wolf it would have to be a camera trap but the photo is in the middle of a road were there are no trees and a wolf would not let a person get that close. So definitely not a wolf.
Life is full of death
It is the way of life
Predator and prey
I bring life and I take it
That is the way of nature
Top

That's a good observation LamarWolf about the cameras; I agree a wild wolf would not get this close unless it was a camera trap, and the middle of a pathway seems like a pretty bad place for one.

I disagree about the road usage aspect though, only because there is evidence that wolves will use roads to get around and hunt.
DaniBeez
___Forum member since 2010
___Avatar by Koa
Top

Definitely not Romeo that's for sure. The first thing I noticed was the ears too and that the animal is simply too silky black. His body is pressed down so the pose could make the tail appear longer, but anyway I still agree with everyone that this is probably not a wolf.

This drives me nuts I hope we'll get the truth someday.

EDIT: Oi, does anyone else see the same picture in this before playing? https://m.youtube.com/watch?v=a--LYvESaRg

I know this is an older post, but I think it looks like a wolfdog. While at first glance, I thought it could be a wolf, but looking at it again, and the location it's in, I doubt it's an actual wolf. Most likely a wolfdog. The camera angle and the snowy setting do make it difficult to tell though. However, having seen pictures of Romeo, I can tell you right now that it is definitely not him.
Top
Post Reply
15 posts • Page 1 of 1